The world is not square, or so we learn at school, yet, on the brink of the third millennium, it is not round, either. I do not know which geometrical figure best represents the world in its present state but, in an era of digital communication, we could see it as a gigantic screen-one of those screens you can program to display several pictures at the same time, one inside the other. In our global world, the pictures come from all over the planet. But some are missing-not because there is not enough room on the screen but because someone up there selected these pictures rather than others.

What do the pictures show? On the American continent, we see a paramilitary group occupying the Autonomous National University of Mexico (Unam); but the men in gray uniforms aren’t there to study. Another frame shows an armored column thundering through a native community in Chiapas. Beside this, we see US police using violence to arrest a youth in a city that could be Seattle or Washington. The pictures in Europe are just as gray.

Intellectuals have been part of society since the dawn of humanity. Their work is analytical and critical. They look at social facts and analyze the evidence, for and against, looking for anything ambiguous, revealing anything that is not obvious-sometimes even the opposite of what seems obvious.

These professional critics act as a sort of impertinent consciousness for society. They are non-conformists, disagreeing with everything-social and political forces, the state, government, media, arts, religion, and so on.

Activists will just say, “We’ve had enough,” but skeptical intellectuals will cautiously murmur “too much” or “not enough.” Intellectuals criticize immobility, demand change and progress. They are, nevertheless, part of a society which is the scene of endless confrontation and is split between those who use power to maintain the status quo and those who fight for change.

Intellectuals must choose between their function as intellectuals and the role that activists offer them. It is also here that we see the split between progressive and reactionary intellectuals. They all continue their work of critical analysis. But whereas the more progressive persist in criticizing immobility, permanence, hegemony, and homogeneity, the reactionaries focus their attacks on change, movement, rebellion, and diversity. So, in fact, reactionary intellectuals “forget” their true function and give up critical thought. Their memory shrinks, excluding past and future to focus only on the immediate and present. No further discussion is possible.

Many leading right-wing intellectuals start life as progressives. But they soon attract the attention of the powerful, who deploy innumerable stratagems to buy or destroy them. Progressive intellectuals are “born” in the midst of a process of seduction and persecution. Some resist; others, convinced that the global economy is inevitable, look in their box of tricks and find reasons to legitimize the existing power structure. They are awarded with a comfortable armchair, on the right hand of the prince they once denounced.

They can find any number of excuses for this supposedly “inevitable” outcome: It is the end of history; money is everywhere and all-powerful; the police have taken the place of politics; the present is the only possible future; there is a rational explanation for social inequality. There are even “good reasons” for the unbridled exploitation of human beings and natural resources, racism, intolerance, and war.

In an era marked by two new paradigms- communication and the market-right-wing intellectuals have realized that being “modern” means obeying one rule: “Adapt or go under.” They aren’t required to be original, just to think like everyone else, taking their cue from international bodies like the World Bank, International Monetary Fund, or World Trade Organization.

Far from indulging in original, critical thought, right-wing intellectuals become remarkably pragmatic, echoing the advertising slogans that flood the world’s markets. In exchange for a place in the sun and the support of certain media and governments, they cast off their critical imaginations and any form of self-criticism, and espouse the new, free market creed.

The problem isn’t why the global economy is inevitable, but why almost everyone agrees that it is. Just as the economy is becoming increasingly global, so is culture and information. How are we to prevent vast media and communications companies like CNN or News Corporation, Microsoft or AT&T, from spinning their worldwide web?

In today’s world economy, the major corporations are essentially media enterprises, holding up a huge mirror to show us what society should be, not what it is. To paraphrase Regis Debray, what is visible is real and consequently true. That, by the way, is one of the tenets of right-wing dogma. Debray also explains that the center of gravity of news has shifted from the written word to visual effects, from recorded to live broadcasts, from signs to pictures.

To retain their legitimacy, today’s right-wing intellectuals must fulfill their role in a visual era, opting for what is immediate and direct, switching from signs to images, from thought to TV commentary.

In Mexico, left-wing intellectuals are very influential. Their crime is that they get in the way. Well, at least one of their crimes, since they also support the Zapatistas in their struggle. “The Zapatista uprising heralds the start of a new era in which native movements will emerge as players in the fight against the neoliberal global economy,” they say. But we are neither unique nor perfect. Just look at the natives of Ecuador and Chile, and the demonstrations in Seattle, Washington, Prague- and those that will follow. We are just one of the pictures that deform the giant screen of the world economy.

The prince has consequently issued orders: “Attack them! I shall supply the army and media. You come up with the ideas.” So, right-wing intellectuals spend their time insulting their left-wing counterparts, and because of the Zapatista movement’s international impact, they are now busy rewriting our story to suit the demands of the prince.

In one of his books, Umberto Eco provides some pointers as to why fascism is still latent. He starts by warning us that fascism is a diffuse form of totalitarianism, then defines its characteristics: refusal of the advance of knowledge, disregard of rational principles, distrust of culture, fear of difference, racism, individual or social frustration, xenophobia, aristocratic elitism, machismo, individual sacrifice for the benefit of the cause, televised populism, and use of Newspeak with its limited words and rudimentary syntax.

These are the values that right-wing intellectuals defend. Take another look at the giant screen. All that gray is a response to disorder, reflected in demands for law and order from all around us. But, is Europe once more the prey of fascism? We may well see skinheads, with their swastikas, on the screen, but the commentator is quick to reassure us that they are only minority groups, already under control. But it may also take other, more sinister forms.

After the fall of the Berlin wall, both sides of the political spectrum in Europe rushed to occupy the center. This was all too obvious with the traditional left, but it was also the case with the far right. It went out of its way to acquire a new image, well removed from its violent, authoritarian past, enthusiastically espousing neoliberal dogma.

The task of progressive thinkers-to remain skeptically hopeful-isn’t an easy one. They have understood how things work and, noblesse oblige, they must reveal what they know, dissect it, denounce it, and pass it on to others. But to do this, they must also confront neoliberal dogma, backed by the media, banks, major corporations, army, and police.

What is more, we live in a visual age. And so, to their considerable disadvantage, progressive thinkers must fight the power of the image with nothing but words. But their skepticism will get them out of that trap, and if they are equally skeptical in their critical analysis, they will be able to see through the virtual beauty to the real misery it conceals. So, perhaps there is reason to hope.

There is a story that when Michelangelo sculpted his statue of David, he had to work on a “second-hand” piece of marble that already had holes in it. It is a mark of his talent that he was able to create a figure that took account of these limitations. The world we want to transform has already been worked on by history and is largely hollow. We must nevertheless be inventive enough to change it and build a new world. Take care, and do not forget that ideas are also weapons. 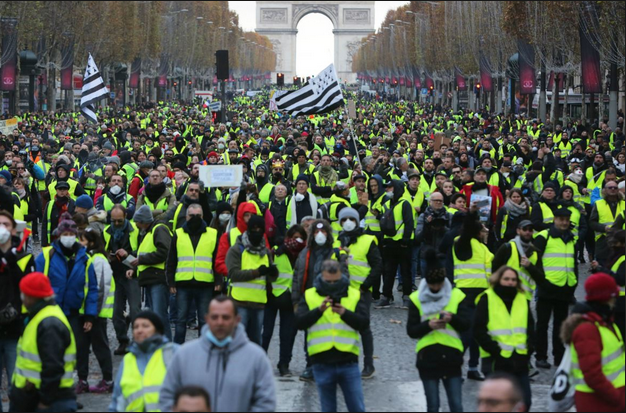