Donate to support this blog!

“How did we do it in Wisconsin?” RNC Chair Reince Priebus asked Saturday morning. “The simplest way I can tell you is we had total and complete unity between the state party, quite frankly, Americans for Prosperity, the Tea Party groups, the Grandsons of Liberty. The [Glenn Beck-instigated] 9/12ers were involved. It was a total and complete agreement that nobody cared who got the credit, that everyone was going to run down the tracks together.”Priebus made his comments on a Saturday morning CPAC panel addressing how conservatives could fight and defeat organized labor state by state. Moderator Grover Norquist, the president of Americans for Tax Reform, opened the panel by suggesting that conservatives had been neglecting the union issue in recent years out of a mistaken sense that private sector union demise was inevitable, and that public sector union decline was impossible.

Grover Norquist’s ideology in one cartoon: 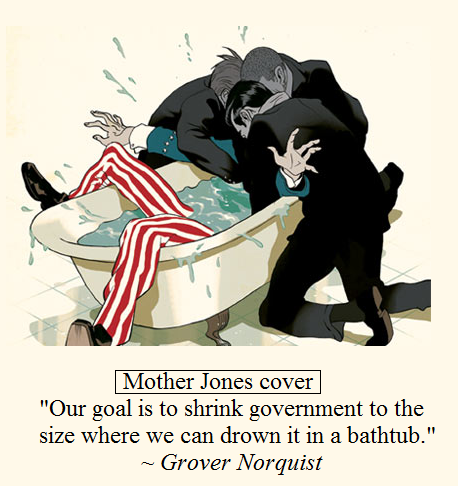 Rather, argued Norquist, a raft of National Labor Relations Board appointments by Obama – who he said had made a strategic error by prioritizing Obamacare over a pro-union “card check” bill – would make this “the time for the other team to cheat” and hike private sector unionization. (Pro-labor scholars have questioned how much impact proposed rules from the NLRB, a body which lacked a quorum for some stretches of Obama’s presidency, will have on union efforts.) Meanwhile, said Norquist, Republican victories in the states offered a chance to “fix a lot of the abuses that we thought we’d have to live with” in the public sector. “Wisconsin,” Norquist later told the crowd, “is the model.”

Scott Walker’s 2011 “budget repair” law, passed amid a high-profile multi-week protest occupation of the state capitol, severely reduced the right of public employees to collectively bargain, effectively imposed public sector “Right to Work,” and required regular “re-certification” elections among employees on whether to retain their now-narrowed form of union recognition.

Panelist Luke Hilgemann, the current Americans for Prosperity COO who formerly led the Koch-backed group’s Wisconsin efforts, told the crowd that the 2011 victory “started back in 2007 on the shores of Lake Michigan,” at a meeting of fifteen intrepid activists who’d “had enough of government overreach,” including then-Milwaukee County Executive Scott Walker. Priebus, a former Wisconsin GOP head, credited the ability to pass Walker’s reforms in part to the party and Tea Party activists unifying well before the 2010 primary behind candidates that made voters “proud to wake up” and vote, like Ron Johnson, Paul Ryan, and Walker. Norquist shared that Walker, after deciding to do a hasty signing of the “budget repair” bill prior to the official event, in order to stave off attempts to sign union contracts before it became law, gave Norquist the pen he used to sign the bill.

Panelist Vincent Vernuccio, of the Mackinac Center for Public Policy, said that Walker’s success, and Indiana’s 2012 “Right to Work” law, helped make possible the subsequent passage of “Right to Work” in Michigan– a state Norquist said national “Right to Work” activists hadn’t had “on their hit list.” Vernuccio also credited that victory in the United Auto Workers’ stronghold to activists “working on Right to Work in Michigan for over twenty years”; the passage of prior “small reforms” that laid the groundwork; and overreach by unions whose failed 2012 collective bargaining constitutional amendment he said helped spur “Right to Work” despite GOP Governor Rick Synder’s previous claim the issue was “divisive.” (In contrast, unions point to pressure on Snyder, who had already signed other anti-union legislation, from top donors who’d helped fuel his victory.)

The Bradley Brothers: Key players long before Grover showed up

For a full list of groups the foundation has funded, please see Contributions of the Bradley Foundation.

According to the Milwaukee Journal Sentinel, “from 2001 to 2009, it [Bradley] doled out nearly as much money as the seven Koch and Scaife foundations combined.”[5]

Harry Bradley was one of the original charter members of the far right-wing John Birch Society, along with another Birch Society board member, Fred Koch, the father of Koch Industries‘ billionaire brothers and owners, Charles and David Koch.[6] “Bradley was also a keen supporter of the Manion Forum, whose followers believed that social spending in America was part of a secret Russian plot to bankrupt the United States,” Jane Mayer writes in Dark Money.[7]

In the same book, Mayer details that, “The event that multiplied the Bradley Foundation’s assets by a factor of twenty almost overnight, transforming it into a major political force, was the 1985 business takeover in which Rockwell International, then America’s largest defense contractor, bought the Allen-Bradley company, a Milwaukee electronics manufacturer, for $1.65 billion in cash. The deal created an instant windfall for the Bradley family’s private foundation, which held a stake in the company. Its assets leaped from $14 million to some $290 million.[7]

The Republican governor’s opponents wanted to know whether the Milwaukee group helped draft the bill or coached those who testified for it. Their suspicions were rooted in the fact that Michael Grebe, one of Walker’s closest advisers, leads the powerful yet mostly inconspicuous voice for American conservatism. Diane Hendricks, a billionaire roofing-supply executive who is Walker’s top individual donor, is on its board.

Bradley and Grebe were central to Walker’s rise to national prominence four years ago, when he rolled back the power of government unions. They’ll probably be equally key to his almost-certain presidential bid.

“Without the Bradley Foundation, there is no Scott Walker,” said Democratic state Sen. Chris Larson, whose district includes its headquarters.

With almost $1 billion in assets, the group has financed research and policy experiments concerning public vouchers for private schools, voter-identification requirements and collective-bargaining restrictions _ all issues Walker has championed. Bradley had ties to many who testified for the “Freedom to Work” law, which lets employees in union workplaces opt out of membership.

While the group has a lower profile than those of David and Charles Koch, the billionaires who’ve raised hundreds of millions for Republicans, including Walker, its aims are similar.

“They are kindred spirits,” Aaron Dorfman, executive director of the Washington-based National Committee for Responsive Philanthropy, said of the Bradley Foundation and the Koch brothers.

One key distinction: The nonprofit foundation can’t directly engage in politics, while the Kochs can spend their wealth on campaigns however they like and enlist other donors. Bradley spends roughly double the national average of 12 percent of foundation dollars on policy and public affairs, Dorfman said.

“The Bradley Foundation has been one of the leading funders of the conservative movement,” he said. “They’ve supported think tanks and other organizations that have been very effective at moving a conservative policy agenda.”

For all of Bradley’s political involvement, most of its giving is directed toward charities, artistic and cultural institutions, and schools. It’s especially generous to entities in Milwaukee, including the Milwaukee Art Museum, theaters, Boy Scout troops and Little League teams.

To Larson, all that charitable work isn’t enough to mitigate actions he says harm his community. “If they weren’t here, I think our community would be a lot better off,” he said.

Walker, 47, isn’t the only likely Republican presidential candidate with ties to the outfit. Former Florida Gov. Jeb Bush won a $250,000 Bradley Prize in 2011, recognition that he said at the time left him “incredibly humbled.” Bush was picked because of his creation of a charter school and testing program and for efforts to “cut taxes every year of his tenure in office,” the foundation’s website says.

Still, Walker, who, along with Bush, leads in early polling about possible Republican candidates, has stronger ties to the foundation.

In 2009, Walker picked Grebe as campaign chairman. Less than a week after winning the governor’s office in November 2010, Walker dined at a Milwaukee restaurant with the foundation’s board and senior staff, the Milwaukee Journal Sentinel reported. Grebe went on to lead Walker’s campaigns against a recall in 2012 and for re-election in 2014.

Before joining the foundation in 2002, Grebe was chairman and chief executive officer of one of the nation’s largest law firms, Foley & Lardner, and is a past president of the University of Wisconsin board of regents. He’s also a former general counsel to the Republican National Committee and RNC member for Wisconsin from 1984 to 2002.

The foundation paid him more than $518,000 in 2013, according to its most recent Internal Revenue Service disclosure.

Editor: This blog post is not intended to attribute all of Wisconsin’s oligarchy of power to one man, Scott Walker.  Nor one particular “bad actor behind the scenes,” Grover Norquist.

It’s to get you thinking about what is the source of the oligarchs’ rise to power? What does plutocracy look like? How does it morph and shape-shift to always be years ahead of Us, The People as we struggle to establish even a slight toehold of democracy in Wisconsin, in the nation. Now that Scott Walker is temporarily out of office in Wisconsin, “progressive” people are celebrating.

Meanwhile, in the think-tanks and social-experiment labs of the Bradley Foundation, or Grover Norquist’s operations, the NEXT Scott Walker or Robin Vos or Scott Fitzgerald are being groomed up in the event those men are dislodged from political office.