“When the test came years ago the university met it boldly where some other institutions faltered or failed. The declaration of freedom was made by the Board of Regents in 1894 when Dr. Richard T. Ely was tried for economic heresy:

” ‘ We cannot for a moment believe that knowledge has reached its final goal or that the present constitution of society is perfect…In all lines of investigation…the investigator should be absoluely free to follow the paths of truth wherever they may lead. Whever may be the limitations which trammel inquiry elsewhere, we believe the great State of Wisconsin should ever encourage that continual and fearless sifting and winnowing by which alone the truth can be found.’

“This declaration of freedom was framed by Herbert W. Chnoweth, then a member of the board, now deceased, and it was incorporated as a plank in the last Republican state platform as a pledge of the party to sustain the academic freedom of the university. It has also been inscribed on a monument erected by a recent graduating class.

“In no state of the Union are the relationships between the university and the people of the state so intimate and so mutually helpful as in Wisconsin. We believe that the purpose of the university is to serve the people, and every effort is made through correspondence courses, special courses, housekeepers’ conferences, farmers’ institutes, experimental stations and the like to bring every resident of the state under the broadening and inspiring influence of a faculty of trained men. At the same time the highest standards of education in the arts and in the professions are maintained in the university itself.

“In other ways the influence of the university has been profound. When I was governor, I sought the constant advice and service of the trained men of the institution in meeting the difficult problems which confrronted the state. Many times when harassed by the conditions which confronted me, I have called in for conference President Van Hise, Dr. Ely, Professor Commons, Dr. Reinsch and others.

“I made it a further policy, in order to bring all the services of knowledge and inspiration of the university more fully to the service of the people, to appoint experts from the university whenever possible upon the important boards of the state–the civil service commission, the railroad commission and so on–a relationship which the unversity has always encouraged and by which the state has greatly profited. Many of the university staff are no in state service…

“…During the last session of the legislature a Saturday lunch club was organized, at which the governor, and some of the state officers and legislators regularly meet the university professors–Van Hise, Ross, Reinsch, Commons, Ely, Scott, Meyer, McCarthy and others–to discussion the problems of the state. Such meetings as these are a tremendous force in bringing about intelligent democratic government; they are very different from the old-time secret, back-room conferences of bosses which once controlled Wisconsin in the interest of private corporations. It is not, indeed, surprising that Dr. Eliot of Harvard, after an examination of the work done at Madison should have called Wisconsin “the leading State University,” for in every possible way it has endeavored to make itself a great democratic institution–a place of free thought, free investigation, free speech, and of consant and unremitting service to the people who give it life. ”
(pp. 32-33) 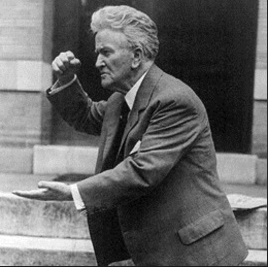