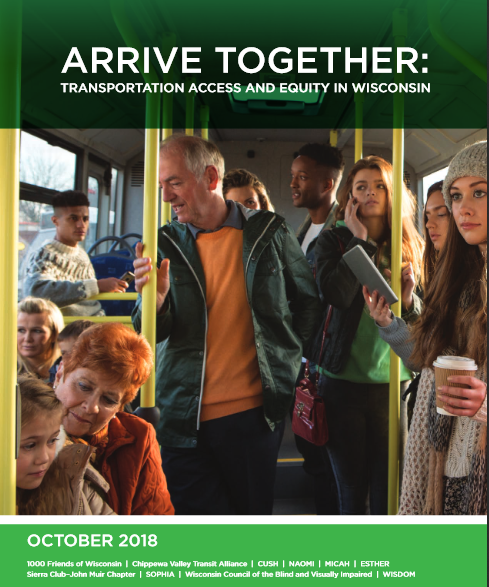 A new report was published from a coalition of Wisconsin organizations focused upon what are often called “Economic and Social Justice Issues”.

You can read it at the link in blue–
Arrive Together: Transportation Access and Equity in Wisconsin

Now, what we need to do is start to light a fire under Wisconsin’s Legislature about this issue. We would like to suggest the most appropriate way to do this is to apply maximum public pressure to your LOCAL elected officials (Town Board, Village Boards, City Councils, County Board supervisors) to urge them to apply maximum pressure to their local State Senate and Assembly reps to pass

Wisconsin had a very brief window of opportunity, when Regional Transit was briefly legalized from 2009-2011.

Then, for entirely dogmatic ideological reasons having nothing to do with meeting the needs of Wisconsin’s people, a one-party government in Madison slammed the window shut again by dis-enabling Regional Transit during the frenzy of passage of the 2011 budget.

We doubt that ANY GOP legislators even read the part of the budget bill that disabled regional mass transit in Wisconsin. That is because, they were voting out of rigid, dogmatic ideology dictated by ALEC, a man named Grover Norquist, the Bradley Foundation, and other corporate-statist idea-makers who instruct the Legislature how to vote.

We suggest you wait until the Nov. 6th election when you will know who will be in the Legislature representing your local District. Then, begin making contacts with both the legislators, and your local elected officials.