What is a System Change Movement?

A network of localized, grassroots groups focused on the demands of their communities for meeting basic human needs in the communities, supported fully at the State level of government. These will be the basic needs which the current economic system is not meeting, and is not even capable of meeting, for affordable housing, adequate food and clean fresh water, mass transit that is independent of fossil fuel combustion, health care and education for all, which do not leave families and households deeply indebted to financial corporations. This is what “system change” means–a rapid change to an economic system in which these basic needs are provided by the economic system.

One-third of movement activity (a suggested ratio) should be focused on elections, or moving politicians in the intended direction of the groups. These will be multi-partisan, organized by people who identify as “Independents,” plus “progressive Democrats,” Democratic Socialists (including their left caucuses), Green Party, Socialist Alternative, as well as further-left groups, those which don’t reject electoral work entirely. Right-wing groups will show no interest in a new economic system, but will resist such a new movement mightily.

Two-thirds of activity should be focused on educating, agitating, organizing to bring in steadily increased numbers of people in each community. Developing independent media for communicating with the people unfiltered by the editorial demands of the corporate media to “spin the stories.” Emphasis should be on many public forums and collective actions which bring people together in real life to discuss their stories and problems. 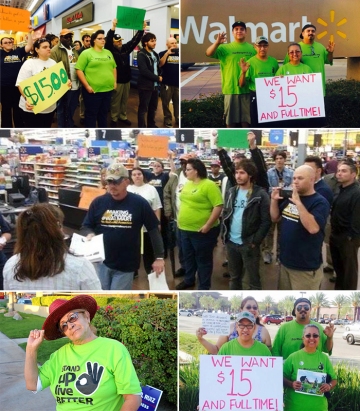 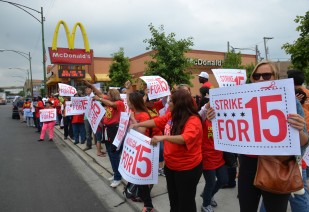 Things such as Walmart protests and strikes highlight the ways in which the economic system no longer meets human needs. Imagine if all the low-paid retail workers in your city, or a multi-county area, organized together and had running strikes demanding $15 an hour (or whatever the demand might be)?

To find out what other communities are doing about them. To widen the network. To make decisions democratically about what is to be done about these problems–what actions will groups, or entire communities, take. Use language that is common, hard-hitting, tells the truth and does not make empty promises which set off people’s “bullshit detectors” because they suspect they’re just empty promises.

I would look at this kind of movement as a source for the new political leadership for these communities, and for the State, as well as the nation. However, I would caution against allowing the grass-roots coalitions to be captured by ambitious or opportunistic politicians, or by political parties or factions seeing to take over and have a ready-made “base” of volunteers and voters. Further, resources (money) raised by grassroots groups participating in such a movement should not be handed-over as campaign donations. A major focus should be breaking the grip of corporate money in politics, not finding new creative ways to get “new corporate” money into politics.

What to do with politicians in office?

In terms of how such grassroots activist groups would interact with politicians already in office, I would not describe this as “lobbying.” I would describe it as “re-training” these office holders. Invite them to come and engage in “listening sessions.” These would be the opposite of what happens now, when a group of citizens are herded into a public forum, usually with plenty of Security Forces on hand to subdue and drag away unruly citizens, and then the politician feeds the citizens the latest orthodox doctrine of what the Party in Power decrees is going to happen. 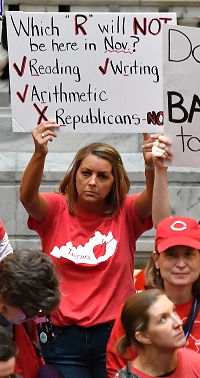 This striking Kentucky teacher has the right idea !!

Those politicians actively thwarting and sabotaging initiatives put forward by the people at the grassroots should experience disruptions in their work, rather than “polite” lobbying efforts where they sit there and tune out the citizens and then thank them for their time. A good example of this kind of activity was the “Wisconsin Uprising” of 2011 in which a spontaneous disruption of “business as usual” was organized in a few weeks’ time after the union-busting Act 10 law was sprung on the Wisconsin people. Remember that new Governor who Grover Norquist described as the “model for the whole nation” in the new politics of one-party imposed austerity?

One recent story noted that the mass movement created in the Oklahoma teachers’ strike has had a definite effect upon the composition of the next legislature in OK.  This is the kind of effect I’m thinking of while writing this blog post. You create a mass movement or organization that the people can’t easily ignore, and in turn, the people may decide to take some positive political action based upon your activity.

Wisconsin is moving ever more quickly away from meeting the human needs of its citizens in those areas of need which I mentioned in the first paragraph. At the same time, we are beginning to feel the effects of sudden climate change. Within two decades we will also feel the impact of the return of depletion of the cheap fossil fuel resource base which keeps the economy here humming along. As production declines resume in these resources, Wisconsin will find itself among the least prepared of all the 50 States.

Progress towards renewable energy at the level of public policy (State government) came to a screeching halt with the rise of the Grover Norquist movement here (Tea Party – election of Scott Walker, complete one-party control over our legislature, etc.). 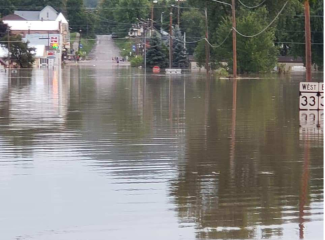 However, the need for System Change, not Climate Change, is more urgent than ever, given the recent astounding flood events we have experienced. We now have a Legislature that is literally life-threatening to our people, because of the denial of the crisis which is beginning to inundate us. Without rapid System Change, the future for the youth now attending K-12 will be a very difficult one, much more harsh than their grandparents had known.

So, my suggestion: Find an area of unmet real need in your community, find the people who are also deeply concerned about that, and start organizing for the deep systemic change that will get that need covered equitably for all people in your community.