Here’s the simple reason why the project known as Dakota Access Pipeline makes no sense at all.  It is being built by a syndicate of pipeline operators including the notorious, spill-prone Enbridge Energy Partners, at a construction cost said to be $4 billion.  To serve an oil field which is already past its peak production, and soon to be in terminal decline.  Here’s a couple of visual aids for us “visual-thinkers” who like to see the data in chart and graphic format.  See what you think after you look at these.

Two charts. One from Tadeusz Patzek, who taught for a long time at University of Texas, in the discipline of petroleum geology, petroleum economics, and so forth.

Tad Patzek is Professor of Petroleum and Chemical Engineering at the Earth Sciences Division and Director of the Upstream Petroleum Engineering Center in KAUST, Saudi Arabia. Between 2008 and 2014, he was the Lois K. and Richard D. Folger Leadership Professor and Chairman of the Petroleum and Geosystems Engineering Department at The University of Texas at Austin. He also held the Cockrell Regents Chair #11. Between 1990 and 2008, he was a Professor of Geoengineering at the University of California, Berkeley. Prior to joining Berkeley, he was a researcher at Shell Development, a research company managed for 20 years by M. King Hubbert of the Hubbert peaks.

The second empirical-production-based curve (model) comes from Jean Laherrere, who collaborates off and on with the Upsala University-based Association for the Study of Peak Oil and Gas (ASPO) and uses somewhat different math modeling, but arrives at a similar “shape” to the demolition/exit curve for the North Dakota Bakken. 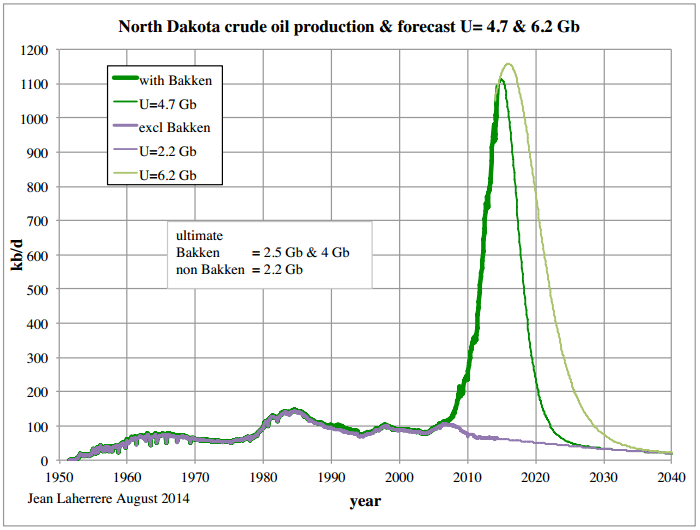 North Dakota’s Bakken is the subject of a ferocious battle between some 500 indigenous U.S tribes, along with a yuuuge number of non-Indian people from all over the USA/the global economy, on one side, and the police-state forces of North Dakota, Morton County Sheriffs, Marathon County (WI) Sheriffs, Hennepin County (MN) Sheriffs, and numerous other law enforcement agencies across the USA looking to score some bucks from joining in the effort to repress this movement.