Yes, folks, the Dakota Access pipeline project is now threatening the western half of the Mississippi watershed (because all markets peak, and ALL PIPELINES LEAK as the protest signs read).  So, it’s time to drill back down through the stacks of docs about fracking and recover the original blast of leaked emails that hit the New York Times back about three years ago.  We’ll call this story “Peaky leaks” because fracking for oil and gas was supposed to solve the problem of the peak of conventional oil production (global peak was 2005-2007 according to most experts who follow the trend).

Some sample screen-shots of the story pages follow, as images (can’t cut and paste these).

The link to the story is here.

How did the frackers sell their story to the Securities and Exchange Commission? He asks. 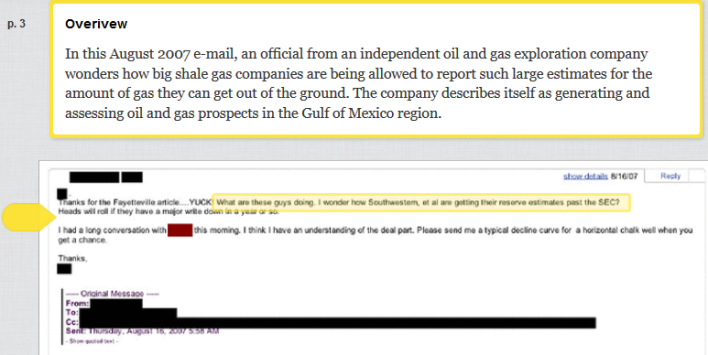 `On p. 44, the viability of the entire Barnett Shale (primarily a natural gas resource) is questioned, here

`
`Sure enough, here’s what the peak-gas production profile looked like about 8 months ago…

`Keep in mind, these are industry insider people  talking among themselves. Why did not of the major politicians make themselves aware of these serious concerns about fracked oil and gas?  Why did Mr. Obama never once express these reservations, although I’m sure he must have been briefed on this stuff. If not, why did he not pick advisers who would provide an accurate critical view of the essential industries keeping the United States afloat?
`
““